DMM was excited to partner with Lionsgate for the theatrical and home entertainment social media campaign of the much-anticipated movie, Spiral: From the Book of SAW - a standalone film within the SAW franchise. We were tasked with making sure that each element of this campaign tapped into the previous SAW movies while also establishing that this new film was fresh and different from its predecessors. From our creatives to our copy and community management strategy, it was as if we were an apprentice of the Jigsaw copycat.

Our primary objectives for the social media campaign were to elevate Spiral: From the Book of SAW as a dark new chapter in the franchise, highlight the film’s well-known cast, and engage the casual horror fans and the hardcore SAW enthusiasts alike.

The missing piece was there the whole time. pic.twitter.com/KGKR4JGH4H

Entering the Next Chapter

To set the perfect trap, we crafted a social voice and community management strategy that drew fans deeper into the world of the Jigsaw copycat through the use of dark humor and an irreverent tone that matched the film. With this strategy in mind, we divided our voice per platform to further appeal to each audience.

For Twitter, we leaned into a “sarcastic Jigsaw” voice where we could be more playful with fans, while still being true to the world of Spiral. To tap into the massive existing SAW fanbase on Facebook, we leaned more heavily into references to the previous films (because IYKYK). Instagram was where we established the new look and feel of the SAW film and lured fans into playing a game with us. 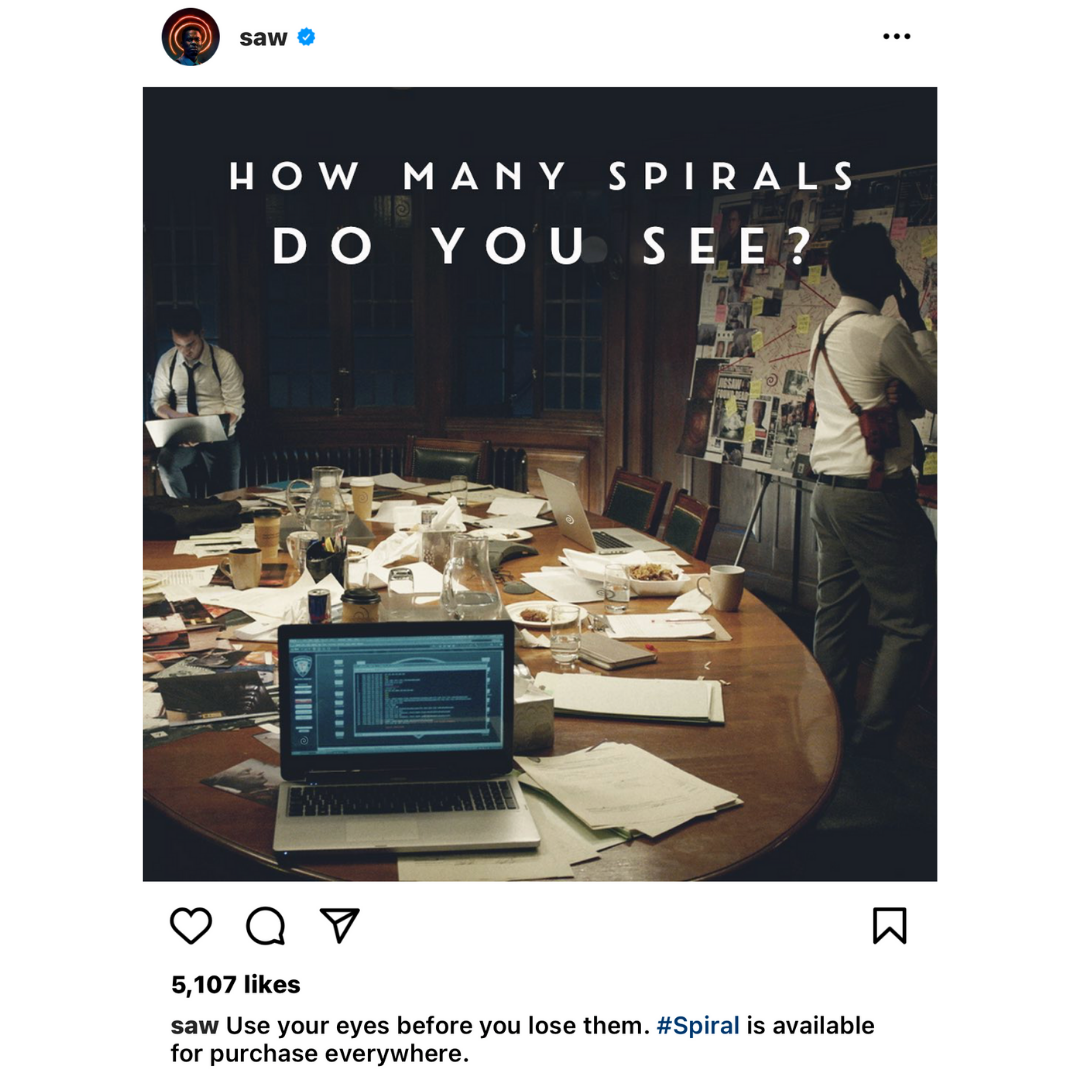 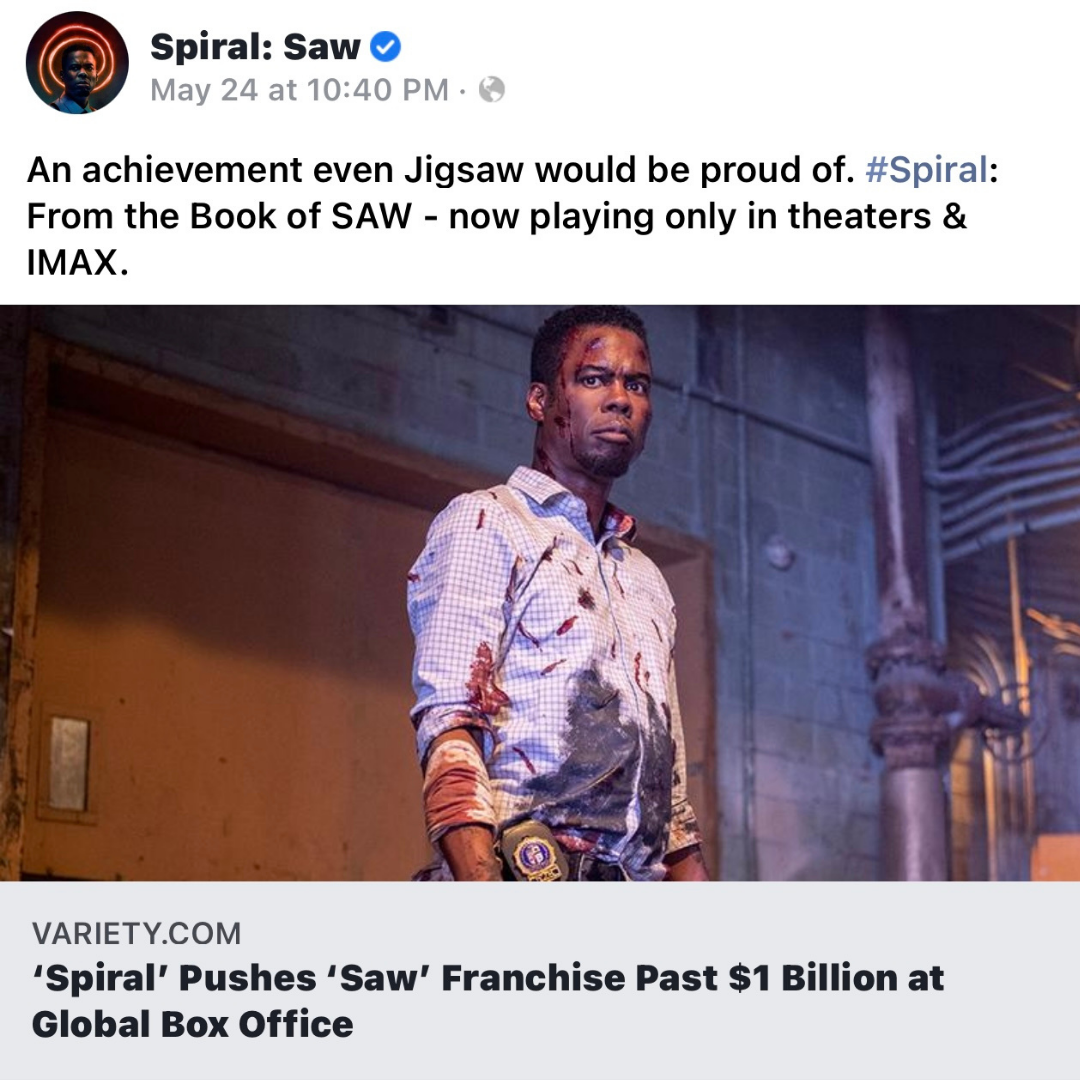 With Spiral’s notable cast (Chris Rock, Samuel L. Jackson, Max Minghella, and Marisol Nichols) and filmmakers that were well-known with the fanbase due to their work on previous SAW films, we wanted to spotlight the film’s star power both on and off the screen. We created content that highlighted each character and explored their relationships with one another as they navigated the specific traps set for them by the killer. Talent and filmmakers were thrilled to engage with our posts throughout the campaign, so we continued to tailor both our copy and community management strategy for an integrated approach.

Additionally, the film’s soundtrack featured the rapper 21 Savage, and so we leveraged that with a “21 Savage Weekend” by sharing several BTS moments from the “Spiral” music video and using lines from his song in our post copy throughout the campaign.

If you think these wallpapers could get more twisted, then you’re right. 🌀 It’s Wallpaper Wednesday, so head on over to our fleets and check out the third installment for you to use. #Spiral: From the Book of Saw - only in theaters & IMAX next Friday. pic.twitter.com/0X4zGzKSzw

The Fans are Pulling all the Strings

With a die-hard SAW fanbase to appease, we kept our fans at the very core of this campaign. In the week leading up to release, we live tweeted all 8 previous movies of the SAW franchise to drum up anticipation for Spiral. To maximize fan involvement in our #SAWathon, we added interactive elements such as trivia questions, BTS images, polls, and easter eggs tying Spiral to the SAW universe. As a surprise, fans also had the opportunity to live tweet along with Spiral director Darren Bousman and writer Josh Stolberg, who made appearances during the marathon.

During the home entertainment window, we returned the discussion to the past, present, and future of the SAW franchise. We added in moments of nostalgia from well-loved SAW films, and we gave fans an opportunity to be a writer for this next chapter with text-only prompts that inspired fans to share their trap creativity. We also kept our ear to the ground on social conversations to find opportunities to participate in trending conversations. We ended the campaign with a bang posting our “Meaning of the Spiral” video where John Kramer passed the torch to William Schenk.

From the theatrical to the home entertainment window, we were able to craft a social media campaign that successfully played by the Jigsaw copycat’s rules. By making fans, talent, and the legacy of the franchise the center of this campaign, we generated a total of 62M impressions from all of our posts across platforms with 6.9M total impressions coming from the #SAWathon. Game over!

The Suicide Squad
Snake Eyes
Back to Movies