DMM was excited to partner with Paramount Pictures in crafting the social media marketing campaign for the theatrical release of Sonic the Hedgehog 2. Through a fan-first approach, we took things 2 the next level by mastering the social voice, allowing fans around the world to connect in our Sonic Movie Discord Server, and sprinkling nods to the video game to help build the anticipation. Throughout our campaign, we kept fans hyped and engaged, making our socials the place for all Sonic fans to gather and share their excitement for the second film.

By having our finger on the pulse of the Sonic fandom, we continuously found opportunities to tap into socially relevant holidays and trends that would resonate with this audience throughout the campaign, such as National Coffee Day, the NFL Wildcard game, and the Olympics. Our voice and community management approach established a level of personality and trust not only amongst the Sonic community, but our general internet audience as well.

Utilizing Sonic’s humorous and energetic tone, combined with his love of referencing pop culture, we crafted a community management approach that connected with audiences and garnered excitement across all platforms. For releases like Spider-Man: No Way Home and Shang-Chi: And the Legend of the Ten Rings, we made jokes and parodied those just as our favorite blue hedgehog would. Fans also enjoyed our playful back-and-forth banter with the cast, especially Ben Schwartz, Colleen O’Shaughnessy, and Lee Majdoub.

See you at the Oscars. https://t.co/Lz6cSMw7rK

Sonic the Hedgehog has built a passionate fan base throughout the character’s 30+ year legacy, so we created a Sonic Movie Discord server to give fans a place to celebrate their love of Sonic. To kick off the server, we launched it in tandem with The Video Game Awards, where the first trailer exclusively premiered worldwide. In response, we had one of the fastest growing servers on the platform.

What happens when you get a bunch of Sonic fans in one place? 🤔We don’t know yet, but we’re about to find out! Speed over to our brand new @Discord server! Hint, you might want to act quick. 👀https://t.co/l3dgi22x1D

We built out the server with various channels for contained conversation, such as memes, fan art, and cosplay while also including broader ones like general, movies, and video games channels to continue fostering community. In the Announcements channel, we would give fans early exclusive previews by dropping posters, art and other assets before they hit our main social pages. Our team created special Sonic 2 emotes that could only be accessed on this server and we introduced a ranking system, where active users got rewarded for their participation by having their status “level up” in a way that mirrors Sonic’s journey in the film. With a server this large, it was important to have moderators that have a love for the Sonic universe, so we brought in Sonic fans who were already moderators of other Sonic servers and Reddit pages to help us maintain a safe, fun environment for all of the fans. The Sonic Discord remained active throughout the entire campaign and has over 16,500 members. 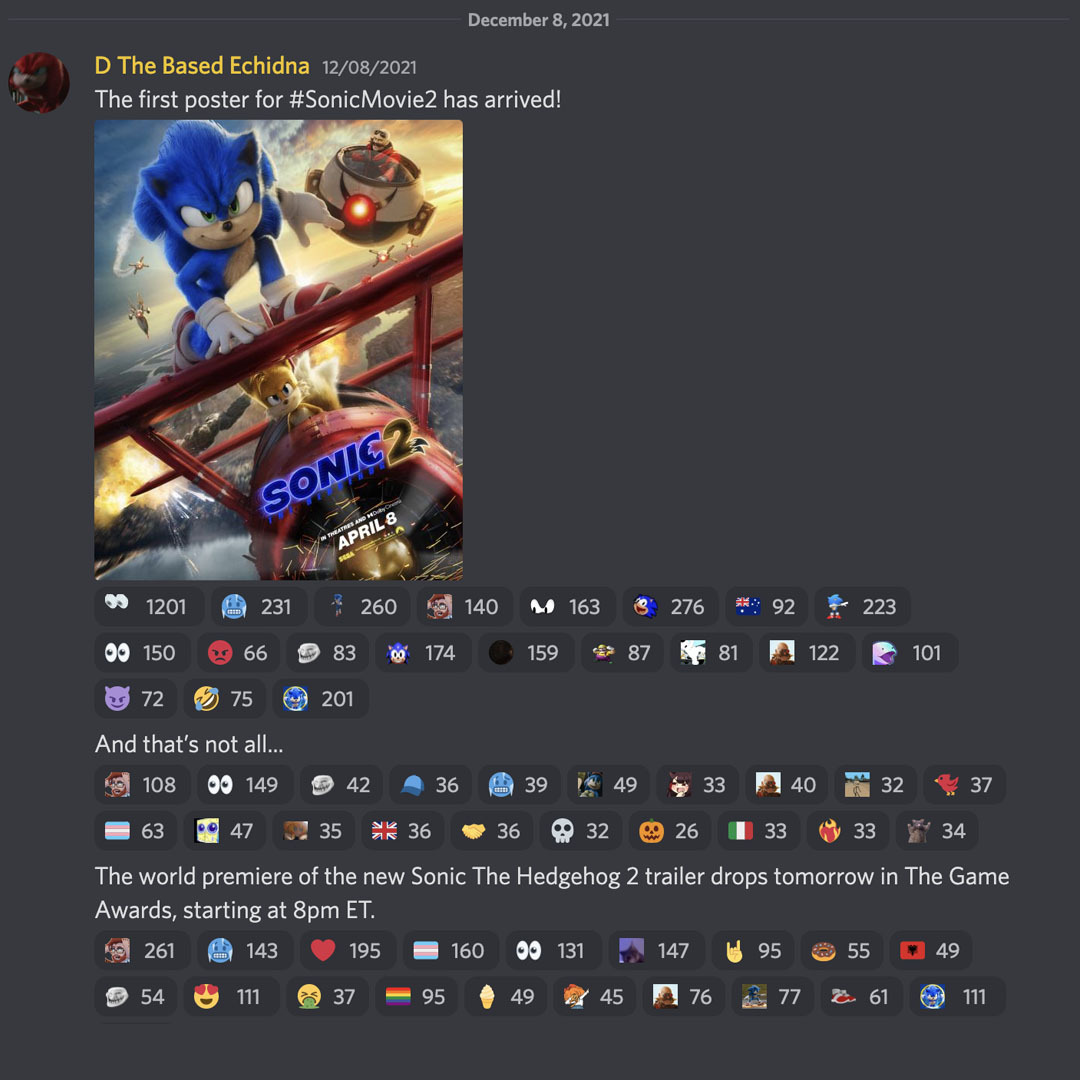 We kept the momentum going through Sonic the Hedgehog 2’s home entertainment window by leveraging timely trends and designing eye-popping creatives that highlighted Sonic’s personality. We continued our “socially savvy Sonic fan” approach and engaged with relevant topics, like this QRT of a viral tweet, as well as participating in social holidays!

We also worked with our in-house Video Production team to produce a nostalgic commercial for the film’s Blu-ray release spoofing this Sonic 2 video game commercial from 1993. Our video team handled all aspects of the shoot from pre-production through post, including capturing the video at our DMM Studio. Fans loved the ‘deep cut’ reference and it became one of our highest performing creative pieces from the home entertainment campaign, receiving over 200k views to date.

Fans consistently praised the Sonic social team for understanding their passion at their level, and how our campaign initiatives showed through our fan-first approach in copy and creatives. Sonic The Hedgehog 2 became the highest box office opening for a video game film, soaring to $72.1 million in its first weekend, and becoming the highest domestic grossing video game film by the third week of release. On top of that, our social campaign efforts generated a total of 515M+ impressions, and 27M+ engagements on Twitter, Facebook, and Instagram! From start to finish, we crafted a fun, engaging social media campaign that successfully built upon our amazing community of fans, while keeping Sonic socially relevant, with the ultimate goal to continue the legacy of Sonic the Hedgehog and beyond.

Disney+ TikTok
Fantastic Beasts: The Secrets of Dumbledore
Back to Movies