DMM was proud to partner with Lionsgate Films to create an innovative in-world social media campaign for the Power Rangers which used large scale digital executions to build excitement around the new film adaptation. Fans were introduced to the reimagined storyline through a series of captivating social experiences executed across platforms.

The campaign was designed to attract the existing fanbase behind the franchise. Once a new generation of fans was established, the next step was building a captivating social presence and maintaining momentum as the film neared release.

Step one of kicking off a successful social campaign: activating the pre-existing fanbase by paying homage to the franchise. We created an online newspaper, titled “The Roar,” for the franchise’s fictional school, Angel Grove High School. Fans were able to immerse themselves in the fully interactive digital world, and were encouraged to explore the site through its various articles in order to learn more about the film’s setting and characters. Our team partnered with a variety of Influencers who served as the staff editors of “The Roar”. In return, influencers promoted the site on their personal accounts, expanding the social reach and increasing traffic to the site. The Roar received enormous praise from fans and press alike, labeled a “really awesome” and “authentic” by Joblo. Since its launch it has received over 600K visits.

Everybody loves a good villain, and few are more deliciously evil than Power Rangers’ Rita Repulsa. The character, played by Elizabeth Banks, “took over” the film’s socials, giving the appearance that she had hacked into the official accounts. Custom content was designed with Rita’s point-of-view in mind, highlighting her crude humor and biting commentary. Rita also used this takeover opportunity to list her #RepulsiveMustHave items from Amazon, parodying Oprah’s Favorite Things. The #RepulsaTakesOver initiatives proved to be incredibly successful, resulting in a global Twitter trend and coverage from over 30 online press outlets, including IGN, MTV, and Moviefone. The content reached 10.5 million unique users, and received over 500,000 direct engagements.

The campaign capitalized on the popularity of Facebook’s Live video feature as a tool to debut the trailer, using a custom video to motivate users to engage and participate. In order for fans to view the new trailer, the Facebook Live had to achieve 75,000 reactions for it to be “unlocked.” The live feed was formatted with a progress bar across the screen and as the reactions tallied up, the % increased. Immediately, the campaign was at the forefront of the industry, being the very first movie account to use the Facebook Live feature like this. Not only did this entice fans, it broke the traditional route of debuting content with an innovative concept creating a memorable digital moment in the media. This digital stunt led to record-breaking metrics, with the video reaching over 2.9 million users and achieving 2.3 million engagements. And once again, press devoured the story, raving about the effectiveness of this new content debut method. 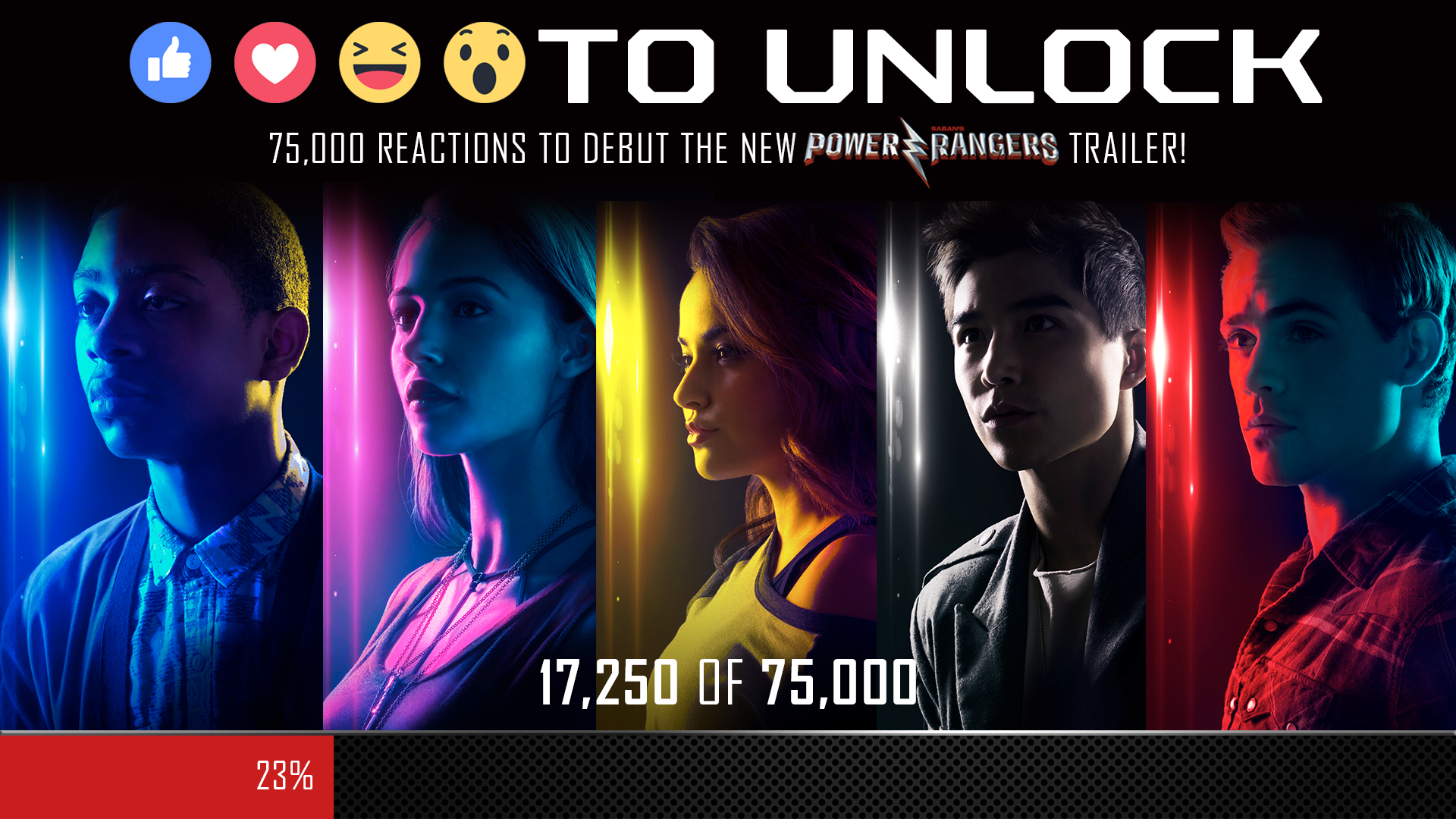 Lionsgate and DMM’s collaboration on the Power Rangers social campaign resulted in a one-of-a-kind digital experience which surpassed any other social campaign of it’s kind. Over the course of its run, the Power Rangers socials garnered 1.8 million followers across all platforms, and received 4.89 million content responses on Facebook, over 86 million impressions on Twitter, 3.1 million likes on Instagram, and 12.7 million mentions across social.

Unforgettable
The Sense of an Ending
Back to Movies