Hulu partnered with Digital Media Management (DMM) to welcome the Animaniacs to the 21st century with a modern, yet zany, in-world social voice to engage new and old audiences.

DMM welcomed the Animaniacs to social media, modernizing the iconic brand for today’s audiences while keeping its signature zany voice intact. We kicked off their social debut with an exclusive clip premiere at New York Comic Con to a highly engaged fanbase, resulting in a 14K+ growth in Twitter followers and 3M+ views/4M+ impressions on the clip in its first 24 hours. The success of the clip proved fans were hungry for more, so we continued to service them with custom engagements and commentary in the voice of their favorite characters.

In true Animaniacs style, we took things to the max, debuting the first episode a day early in our #AnimaniacsWatchParty on Twitter while live-tweeting with our talent and fans. Following the premiere, we continued to listen to our audience and adapt our content to suit their needs. We capitalized on fan-favorite moments, put our own spin on the latest memes, and contributed to trending conversation. We also launched a weekly Fan Art Friday initiative to support and further encourage the creation of fan art in our community. 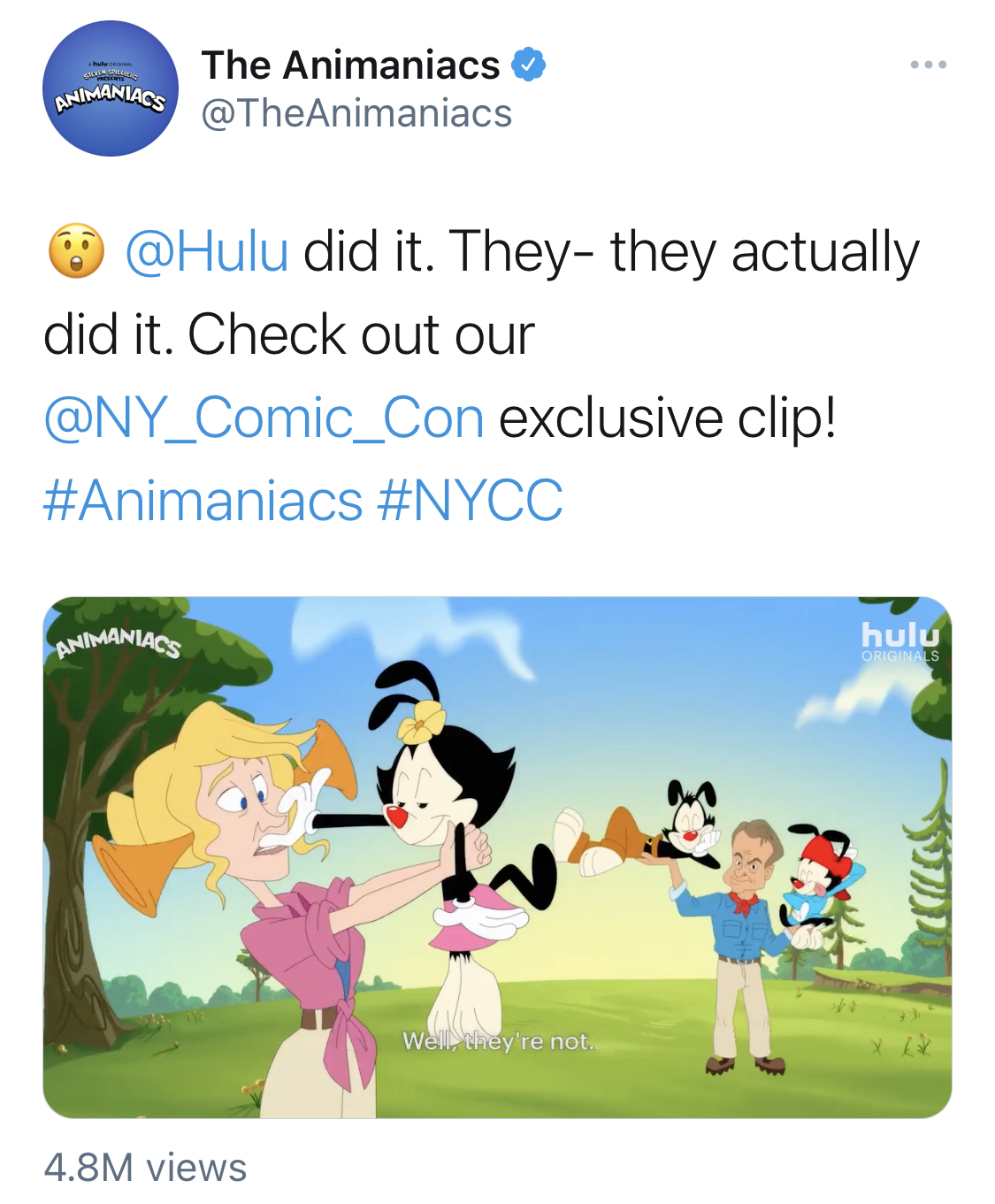 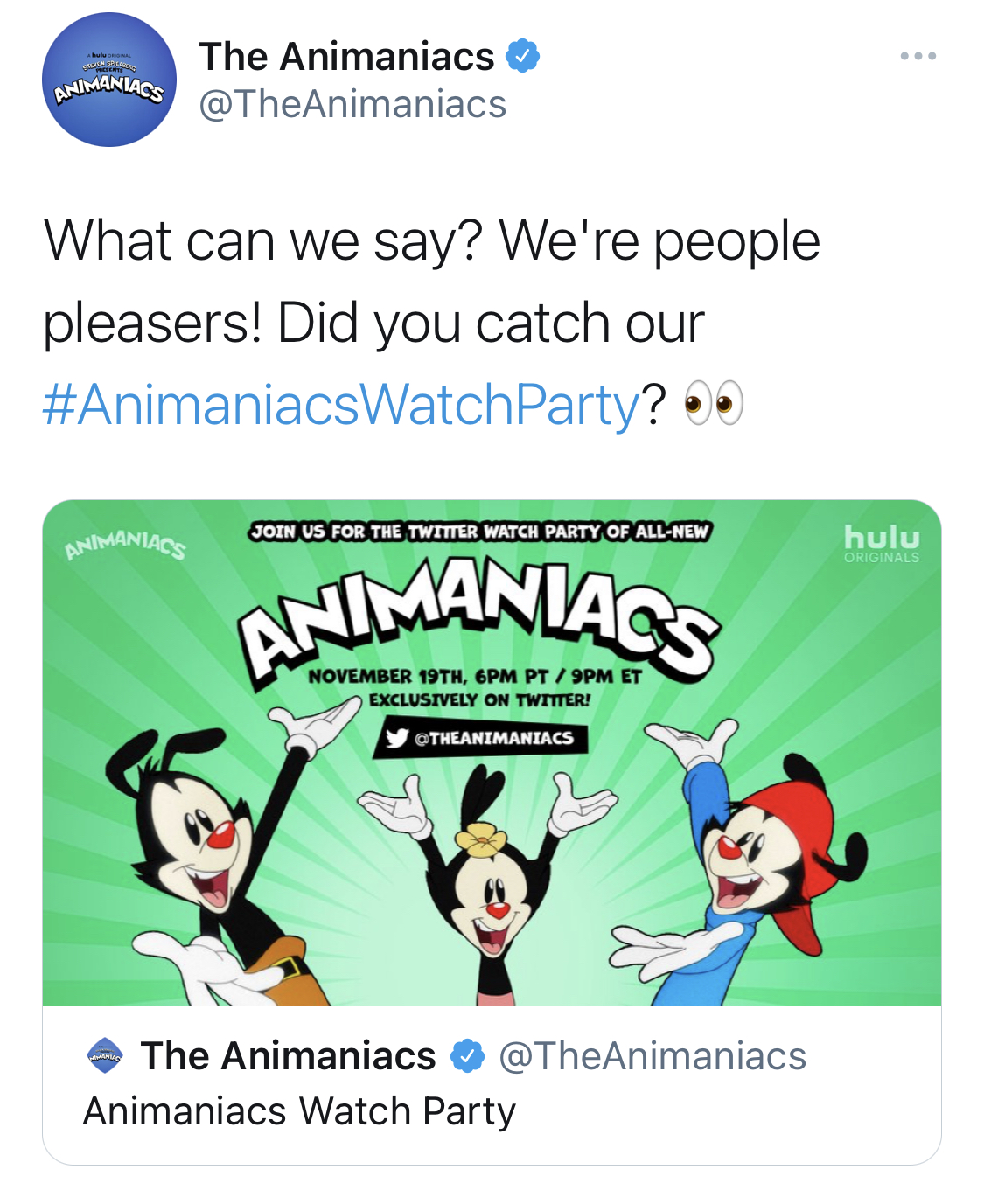 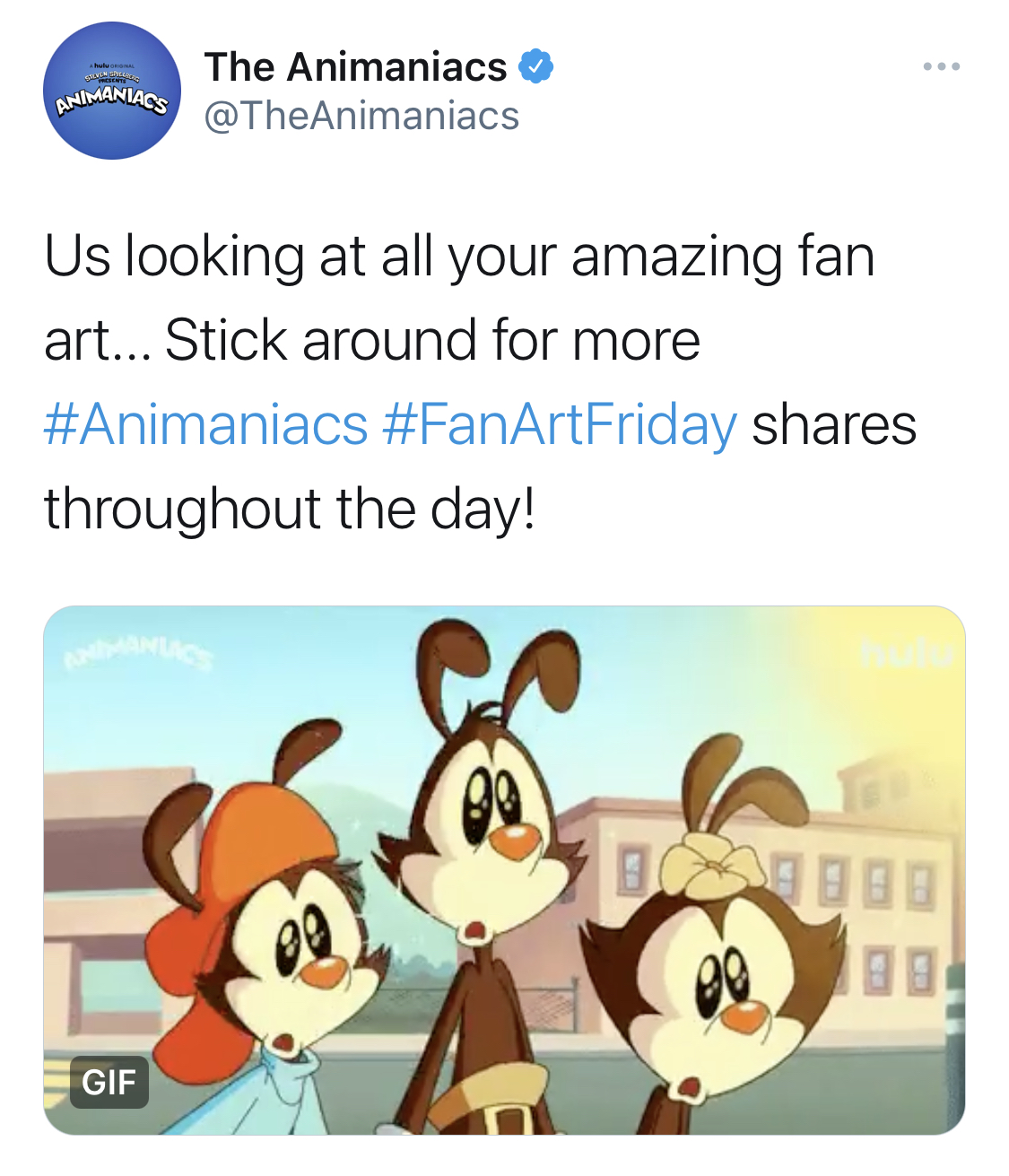 Whether we were making the latest trend insany or interacting with celebrities, our in-world approach to community management proved successful and was praised by talent and fans alike. Our live episode premiere via Twitter Watch Party resulted in over 1M views, while our live-tweet efforts brought #AnimaniacsWatchParty up to No. 12 on Twitter’s US Trends. By the show’s premiere, we had grown the accounts to 80K combined followers, which increased to 125K only a month post-launch. 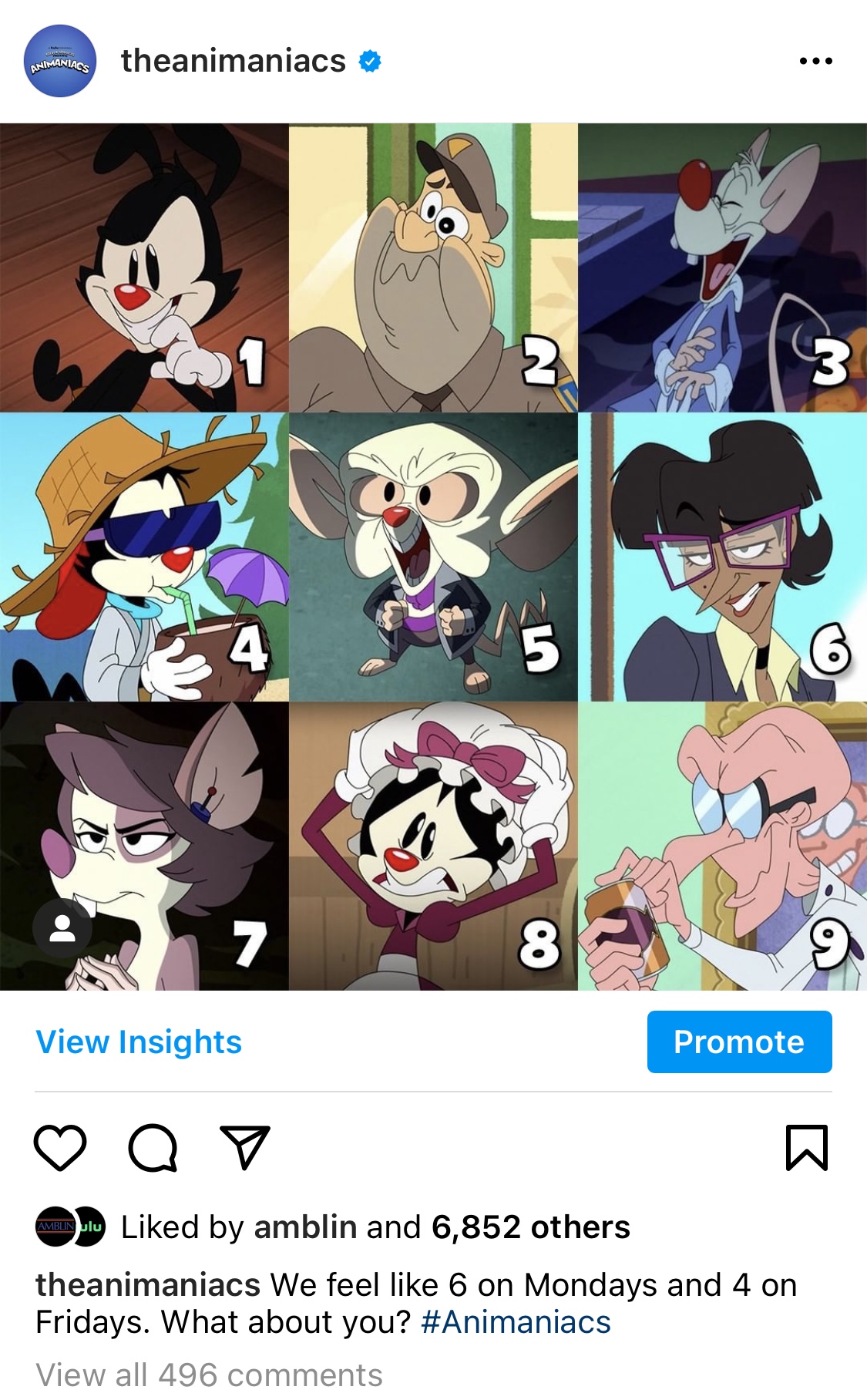 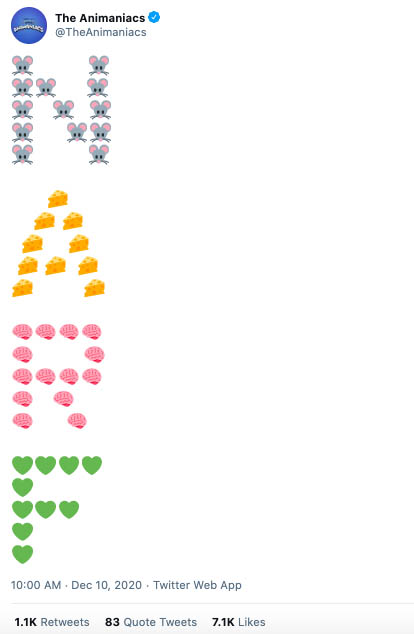 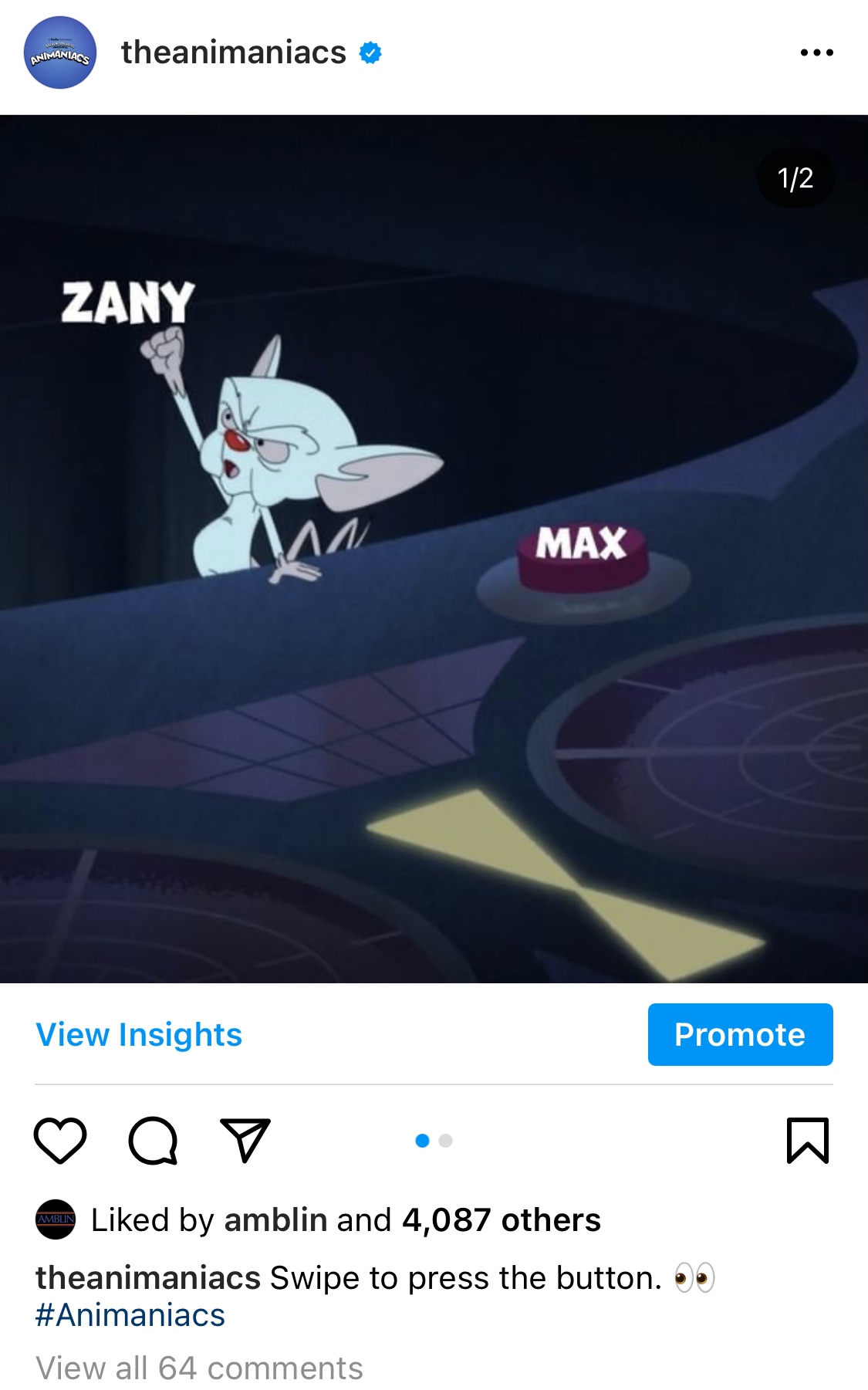