DMM was delighted to partner with Lionsgate on the social media campaign for Angel Has Fallen. To end the summer with a bang, we positioned Angel Has Fallen as the last big movie of the season by spotlighting our A-List cast, highlighting the big action and blockbuster elements, and creating an intimate experience for the franchise fanbase to have their voices add to the overarching conversation.

Our key objectives diving into this social media campaign were to create an immersive social media experience and engage with audiences as the ultimate fan all while activating a strong community of pre-existing “Fallen” fans. 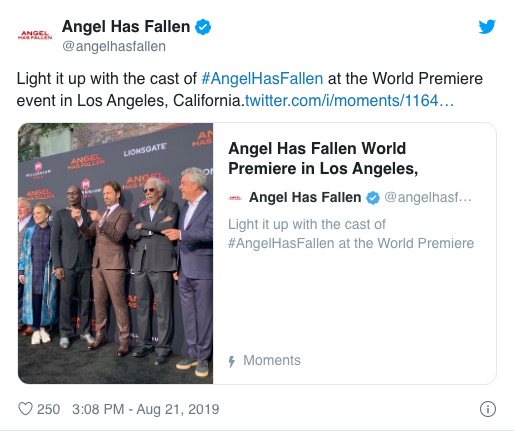 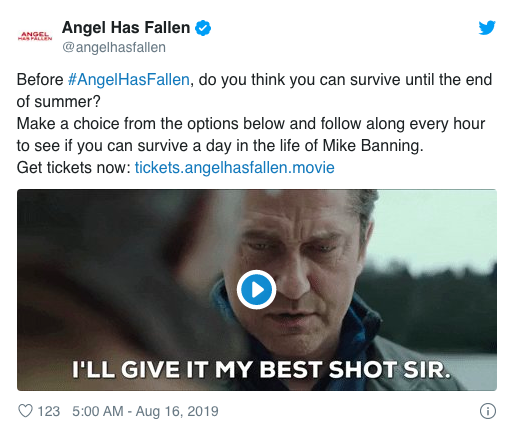 The A-List Cast on the Front Lines

One of our main goals with this campaign was to generate excitement among fans of our impressive cast. Thanks to a legendary line-up of drama and action powerhouses who were all active on social media, including Gerard Butler, Morgan Freeman, Jada Pinkett Smith, Piper Perabo, Danny Huston, and Lance Reddick, we were able to leverage their active digital presence to tap into their individual fanbases and expand our audience even further.

We tailored our creatives to fit within the scope of character introduction pieces that teased the importance of each of their roles in the film. By heavily featuring talent in our character pieces, live premiere coverage, captured content, and talent-specific GIPHY stickers, we were able to convey the cast’s love and excitement for the film.

As the third installment in an established franchise, Angel Has Fallen continued the tradition of leaning into the high-impact blockbuster elements and fast-paced tone, which positioned it as a must-see summer movie. Our creatives took fans right into the action with thematic character pieces that set up the high stakes of the film, and stylized gifs and countdowns to keep fans on their toes. To engage our audience, we scripted and executed a unique Twitter choose-your-own-adventure stunt that let fans step right into the action with engaging polls, ending on a cliffhanger that made them want to see what happens next in theaters.

Leaning heavily into Gerard Butler’s active fanbase, we created an official Angel Has Fallen Facebook Group that house exclusive content and weekly challenges. Fans were even warmly welcomed into the group by Gerard Butler himself, via a custom welcome video. By creating an inclusive invitation to a digital space for fans to comment and connect with each other from around the world, the positive sentiments organically continued to grow, amassing more than 7K fans within the first couple of months.

We successfully generated positive awareness surrounding the last action-thriller of the summer by bringing together new and existing audiences to be part of the bigger social conversation, while keeping everyone on their toes leading up to the film’s release. With the involvement of our A-List cast and the film’s fanbase, we successfully created a digital experience where they could share their love for the franchise, thus building up their own anticipation surrounding its theatrical release. As a result, Angel Has Fallen reigned as the #1 movie in America for two weeks in a row.

Blinded By The Light
The Kitchen
Back to Movies